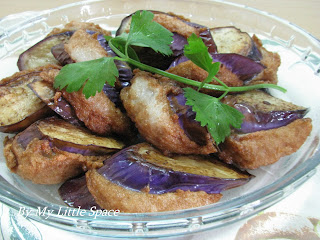 This happened to be one of my husband and his family favourite dish. You can see this serve on the dining table during special occasion. These fried egg plants are actually stuffed with fish paste. Fish paste is something that not easily seen and get in western country; but in Asia, you can easily buy or eat at any food corner or market place. Or we made our own fish paste. Normally, fish paste is used in making stuff bean curd or fish ball which is very famous over here. Though, still not many of them can make this recipe successfully. For me, I'm the lucky one! I've learned this recipe from my mom-in-law. This just happened to be one of their traditional recipe. 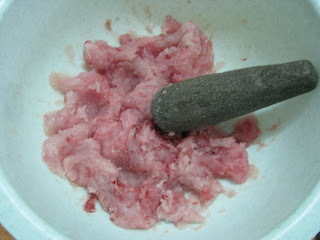 Firstly, pound the meat for about 2-3 minustes or untill the meat doesn't stick to the handle. Of course, you can use the electrical chopper or mixer to prepare this but the texture is far difference from handmade. 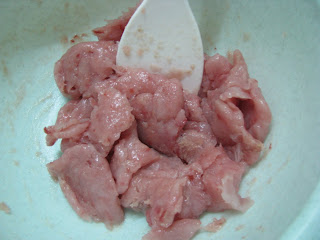 Then, add in 1 tspn salt and pepper powder and mix well. Next, add in a tbsp of wine mixture and mix to combine by pressing the meat over & over again. It will take a little while in this mixing process. So, you need to be very patience. 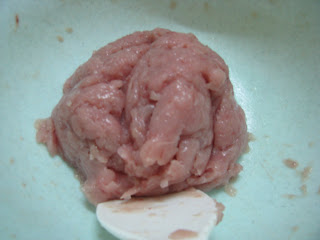 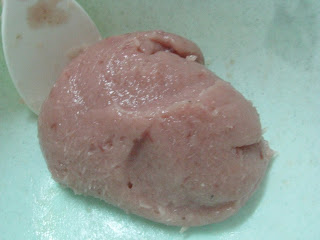 The fish paste should be looking like this when it's ready. Then prepare some eggplants and slice them into oval shape about 2cm in thickness. 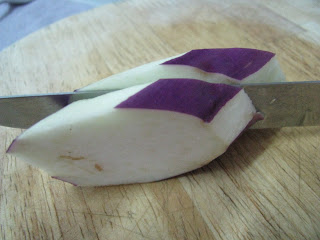 After that, cut the sliced eggplant in the middle till three quarter deep so that we can flip open the egg plant to stuff in the fish paste. Finally, fry the stuff egg plant untill cook. Of course, you can serve them with either gravy or chili sauce.
Gravy Ingredients :
1 cup water
1/2 tbsp tapioca flour
3 tbsp vegetarian oyster sauce
1 tspn light soya sauce
1 tspn preserved soya bean paste (optional)
some pepper
some pound ginger & onion
- combine water and tapioca flour, and mix well.
- fry the ginger & onion with 2 tbsp cooking oil until fregrant.
- add in oyster sauce, light soya sauce, pepper and soya minced paste; stir under medium heat.
- pour in the water mixture and simmer untill thicken, then off the heat.
- pour the gravy over the fried stuff egg plant. 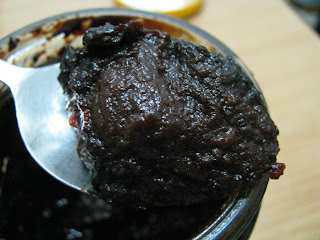 Here is the preserved soya bean paste. I think probably you can get this from the Asian food store.
Email Post
Labels: Fish