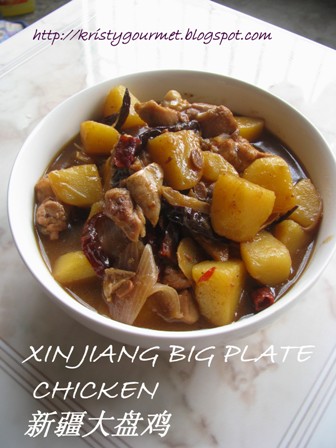 Xin jiang is the largest Chinese administrative division in China. The well-known route of the historical 'Silk Road' ran through this territory from the East to the north-western border. And due to the Muslim population in Xin jiang, their food mostly refer to Uyghur cuisine where meat.and many kind of spices are used in their cooking. I am lucky to have discovered this flavourful dish not long ago. Big plate chicken is one of the popular dish in Xin Jiang. And beer is used on this recipe to braise the meat. However, I skipped the beer and used shaoxing wine or rice wine instead. Please read on for more. 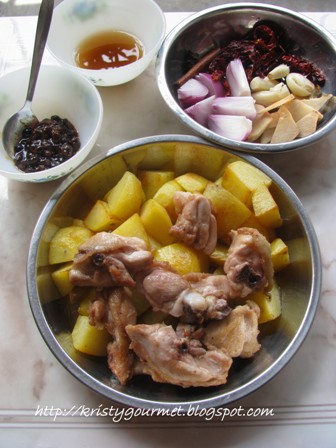 You may choose not to fry the chicken as its an extra work for you. I personally prefer to do so cause it gives the meat a tremendous aroma after cooking instead of meaty smell. 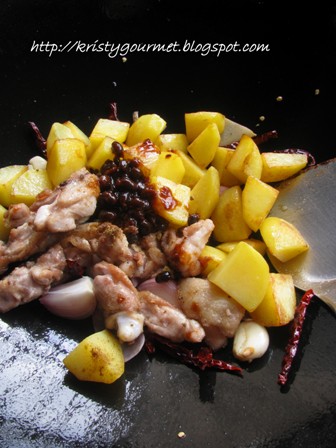 (5)  next, stir in chicken meat, potatoes and bean paste, let to cook for about 5 minutes over medium heat.
(6)  now, add in water and the remaining seasoning, bring it to boil till potato & meat became tender. Add in extra water if possible.
(7)  when ready, stir in thickening till gravy became thicken but not too dry. 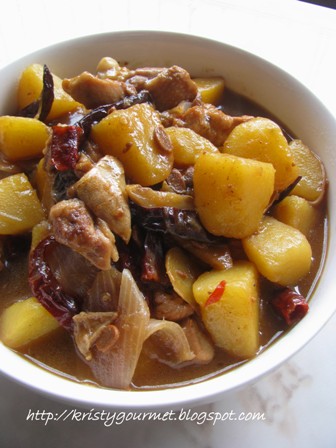 Another highly recommended dish to serve on your dinning table. I love especially the gravy. It smells so inviting.  Its best to reduce the dried chili if you can't handle hot & spicy food. I'm sure you're going to fall in love with this beautiful exotic dish.
Email Post
Labels: Chicken