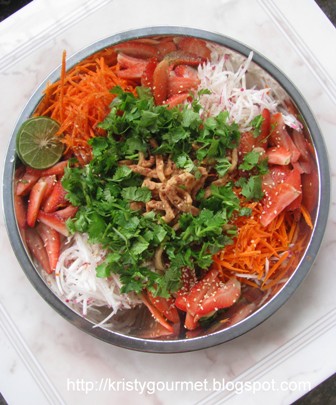 'Yu Shang' is a very popular salad dish to serve with during the whole Chinese New Year season especially here in Malaysia and Singapore. 'Yu Shang' is actually a symbol of increase in abundance, prosperity and vigor.... plus the deliciousness of its own and that is why it became so famous these days. Its a tradition to have 'Yu Shang' especially on the seventh day. According to Chinese legend, the goddess 'Nu Wa' has spent six days creating animals out of mud and finally, created a mankind on the seventh day. Therefore, it is called 'yan yat' (人日) meaning the human day. I love this salad dish a lot but I would prefer going without the raw fish. So, I created this simple dish for the family. 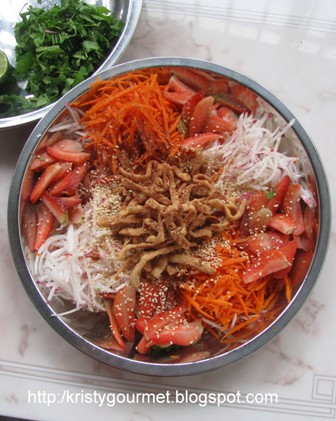 For preparation :
(1) wash & clean everything before julienned & slicing.
(2) then keep julienned red radish & carrot, strawberries and cilantro refrigerated before used.
(3) combined all salad dressing ingredients together and mix well., then set aside.
(4)  preheat frying pan then throw in the white sesame and toast till golden brown. It only takes a few seconds to do it. Set aside to cool. 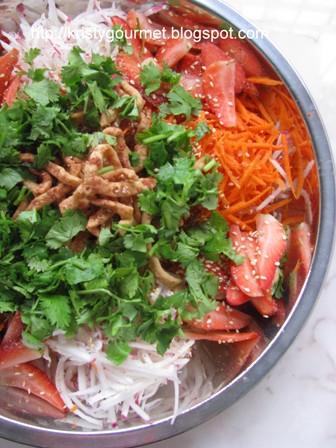 Once its ready, arrange everything onto a big serving plate then sprinkle on toasted sesame, five spice powder and pepper then squeeze in the lime or lemon. Finally, pour in salad dressing and here we go...... LETS DIG IN TOGETHER and start mixing it ! And everyone should start shouting out "兴。。旺。。Huat ahhhh。。。" , Hopefully to bring good luck throughout the year. >o< 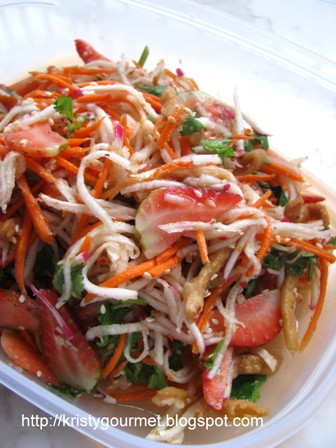 Its nice to have something healthy and yet simple during family or friends gathering at home during the festive season. My kids love it and its something new for those food lover as well. Enjoy & have fun !