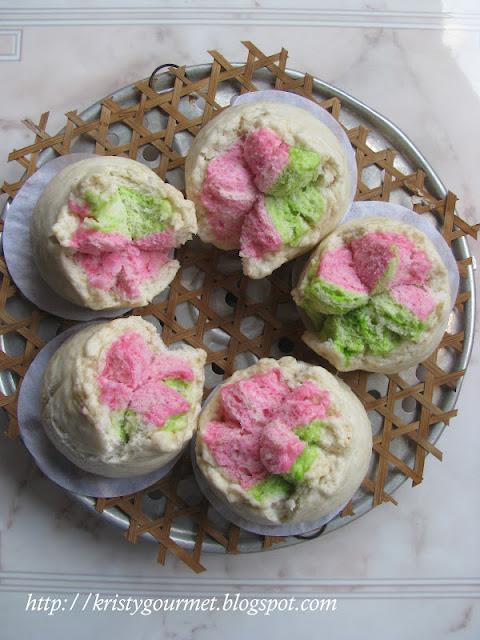 These blossom mantou also called as 'wishful silver' and some even called it as 'moho buns' in China. This kind of bun is actually originated from Yantai traditional pasta varieties. According to the legend, this bun was invented by the Yuan Dynasty, Luoyang the Dongxiang 'Ma' family's kitchen helper.At that time, the Ming Emperor is still a 'Ma' family's handyman. He loves eating these buns and later after he became the Emperor. He started introducing these beautiful peony looking buns to everyone and now has became one of the famous snack in China. This bun is quite sweet unlike other steamed buns and it's widely sold during special occasions or festivals. Here, I have to  thank Vivian for the inspiration & the introduction. These buns are really awesome. 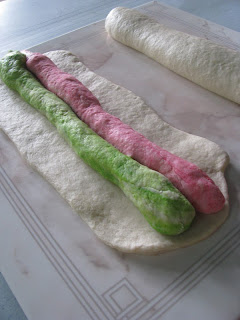 Method :
(1)  mix together ingredients (B) till baking powder dissolved.
(2)  then combine ingredients (A) & (B) into a big mixing bowl and stir to form a soft dough. Knead till smooth .
(3)  need not further fermentation, straight away divide into 5 portions by twisting the dough for separation. For better result do not use a knife.
(4) place dough to parchment paper & rest for 15 mins before steaming them over high heat for 20-25 mins . 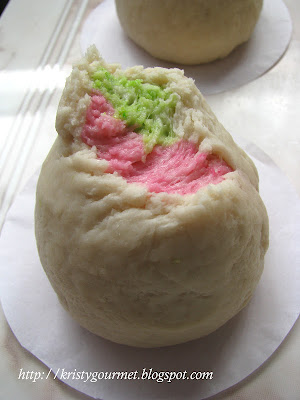 You'll get more or less 420gm of starter dough after overnight fermentation, which can be used in making 2 portions of the above recipe. I made one portion with plain colour and another portion with colour as desired.  Then wrap one with another to form this colour mixture buns (as shown in picture). Some even making these buns by using rice flour and ended up with a name called 'moho kuih'. 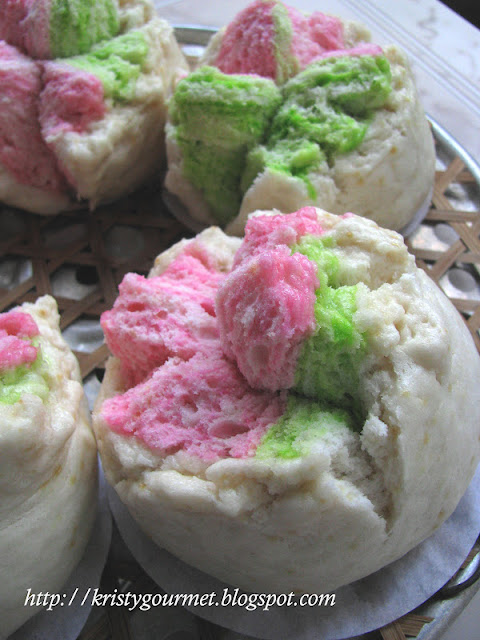 Actually, these buns are not totally perfect cause I didn't dissolved the baking powder into water properly and causing the yellow spots on the bao skin. However, overall they look fine! haha.... Hope you guys will love it too. It's sugar high Friday! So, enjoy.
*
I'm sending this to Wild Yeast Blog @ Yeastspotting.
Email Post
Labels: Bread Dim Sum Snacks Steamed Bun