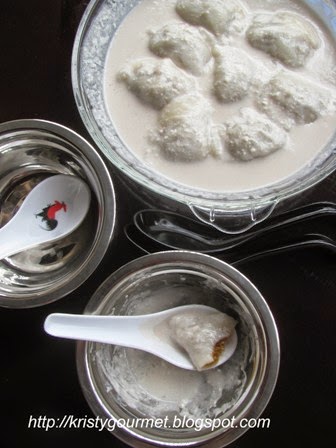 Honestly, I have never heard of this 'kuih sepang kukus' (dumpling sepang) nor seen it before in my life. It also called as 'kuih basah' (wet dumpling) as it is steamed. I came across this kuih from an oldie magazine of a friend. As it mentioned, 'kuih sepang kukus' is originated from Negeri Sembilan and its customary to serve it at the bride's house on the wedding night. There's actually a place in Negeri Sembilan called Sepang where its located just nearby the KLIA airport..... also near to hubby's home. However, I'm glad I finally have the chance to give this a go and introducing this special dessert to my readers. 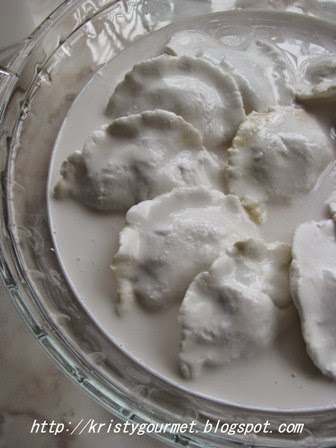 It was quite exciting while waiting for something new to come out from the steamer! >o<

TO ASSEMBLE
(1) press to flatten dumpling skin into round shape between a plastic sheet which is much easier, place in the coconut filling then nicely sealed.
(2) place stuffed dumpling to tray then add in pandanus leaf & 1/2 cup coconut milk mixture.
(3) steamed for 10-15 minutes over high heat or till cooked. Serve hot once its done by adding in the remaining coconut milk mixture. 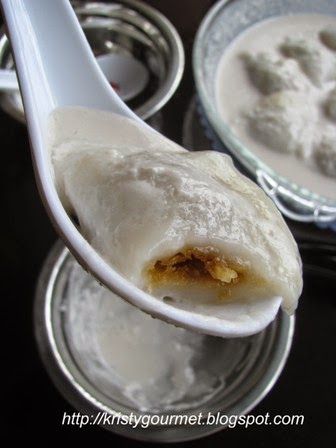 Oooo..... my first bite on the 'kuih sepang kukus' ! Slurpppp.... The texture is very smooth & springy and it goes really well with the coconut filling. It is something quite similar to the Korean dessert called songpyeon. Of course, this 'kuih sepang kukus' best to serve it hot or warm together with the coconut milk gravy. Pretty addictive ! Hope you guys will like it too. Enjoy ! 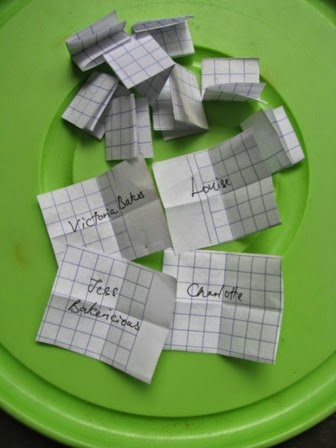 Now.... here's the giveaway result you've been waiting for ! CONGRATULATIONS to all four winners Victoria Bakes, Louise, Jess & Charlotte. Please kindly send me your contact address through email ASAP. Thank you for joining the contest everyone. Hopefully, there'll be more coming up in future.