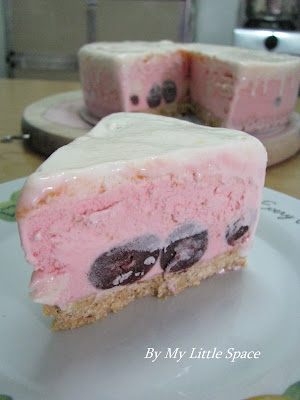 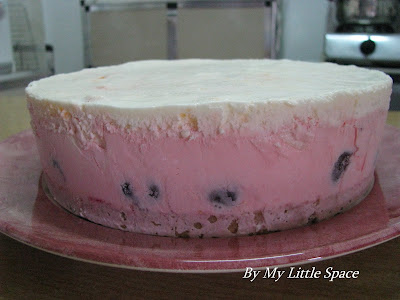 Firstly, I would like to apologize for not visiting you guys lately or have missed out visiting anyone of you! I've been extremely busy and don't have much time for any baking but just some simple meal for my family. Though, under my children's request I did a quick one a couple days ago, at 12am in the morning! *_* It only took me half an hour to complete the whole thing....so, it's OK! And here's what I did.

Ingredients for Biscuit Base :

- combine all ingredients and mix to combine.
- then press the mixture to a 8" spring form pan & keep chilled.
(for 9" pan, add another 70gm biscuit) 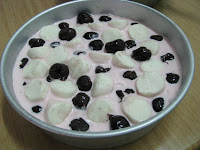 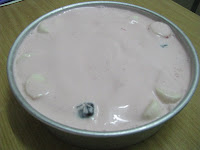 - beat ice-cream untill creamy and then pour half portion over to the biscuit crust base pan.
- throw in all the dark cherry & marshmallow.
- and then cover with the rest of the ice-cream about 3/4 of the pan.
- Freeze untill set before top with 1 cup of apricot ice-cream to have a smother surface.
(which I did it in the next morning)
- again freeze to set before serving. 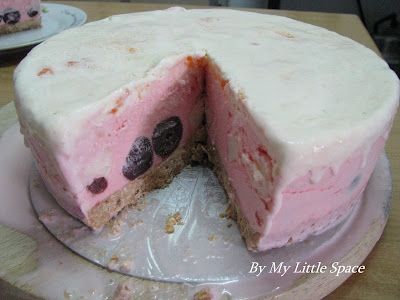 Just look at those melting ice-cream....almost everywhere! I did cut the cake as quickly as possible. Yes, it's a very challenging task! haha.... After slicing the cake, I put them back into the freezer. They still look great after that! 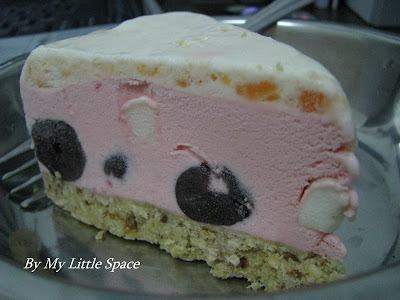 You know what happened? My son kept on telling me that he doesn't like the cherry but he ate at least 4 slices. I handed 2 slices over to my neighbour. Her daughter was so excited! I only have one slice for myself.
Email Post
Labels: Cake Ice-cream