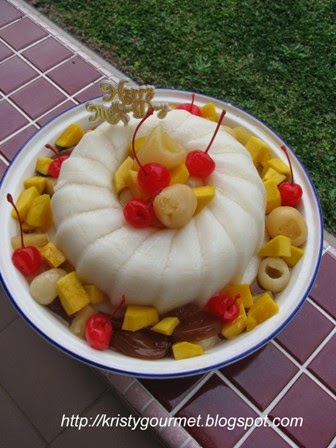 We used to say 'Life is too short' and I remember I just mentioned it not long ago. A human approximately will have about 28,000 days to live, if we managed to survive till 80 years old. And my father in law just did it ! He suddenly passed away peacefully on the 13th of May, by the age of 85. The whole family going to miss him dearly. I'm so glad he managed to celebrate the very last Mother's Day with my mother in law. And this is the last cake I served him just two days before he left us. As time is concerned, I didn't baked any cake for the previous Mother's Day but made a jelly cake instead. And it was an unforgettable one ! LOL... It was hard when it comes to decision making here.....as I want something simple and yet funky. So, almond jelly cake is the final. This is not the common almond nuts I'm trying to mention here but the Chinese almond which also called as apricot kernel. Honestly, I used to hate it so much when I was a kid other than bittergourd, due to the unpleasant smell and taste of it. Ehhh.... However, I didn't understand why I became so fond of it for the past few years. haha.... Yeap, it was a very difficult choice indeed. 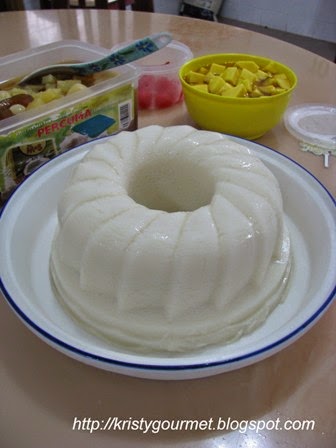 
Method :
(1) combined water, milk, agar-agar powder, sugar and almond powder into a big pot and bring it to boil.
(2) let the mixture simmer over medium heat till thickened.
(3) then off the heat and pour agar-agar mixture to a 8" bundt cake tray or silicon mould.
(4) leave to cool then keep refrigerated, finally decorate the jelly cake with chilled mixed fruits. 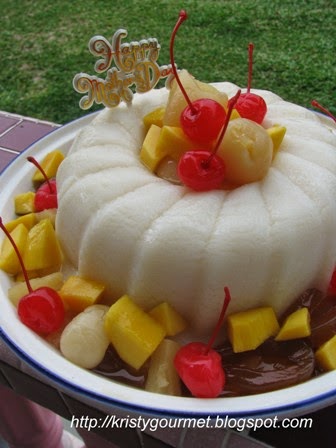 Though this almond jelly cake is not very well received, yet we managed to finish up half of it that evening. However, we had great fun watching everyone's reaction when they took their first bite on it. haha... My father in law had a BIG laugh as well. Just how could I forget the smile on his face !
Email Post
Labels: Dessert Jelly