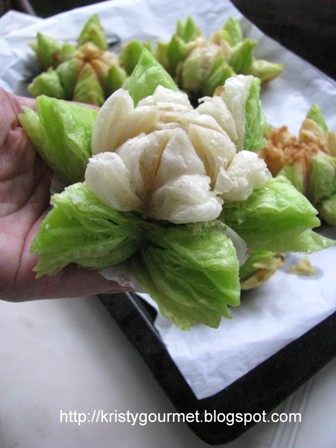 This lotus pastry has been in my list to do for years.... Finally, finally....finally, I have the courage to give it a shot. It was quite successful though I'll have to say, except some became darkened which caused by the dirt came from cooking oil after several frying. Actually, the hardest part is frying task. The cooking oil shouldn't be too hot nor too low. I spoiled the first three dough before I got them right. The first one didn't expand at all due to super hot cooking oil which gave it no time to expand. The second one, super slow expansion time due to super low heat. The third one, I decided to separate & flip open each cutting point of the dough by using a tooth pick and then fry it.with the right heat. However, I broke some of the petals during frying process. So, shouldn't push it around too much as the pastry turned really soft at that point. This pastry is best to be served after its completely cooled. At least an hour or so. Whoa.... at least, I got one perfectly done ! clap clap clap...... Its not a bad idea to serve this presentable snack on the mid-autumn festival too. 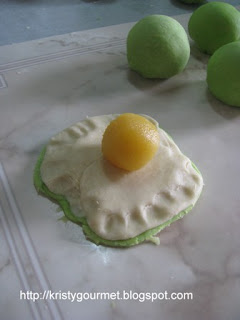 Method :
(1)  for both dough (A), mix together sugar & flour then rub in shortening to form crumb like mixture, next, stir in water to form a soft & elastic dough. Set aside.
(2) for dough (B), combine both ingredients till well cooperated then divide into 16 portions.
(3) now, divide both dough (A) into 8 portions each, so all together you will have 16 portions.
(4) wrap dough (B) into (A), sealed and then form into ball shape.
(5) further rolling process, please do following here. 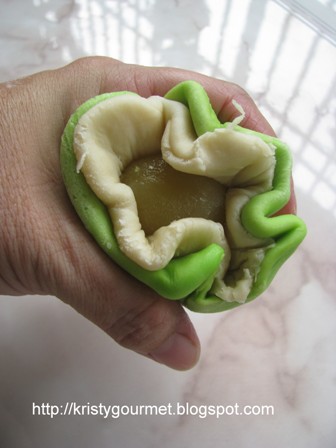 (6) after the rolling process completed, flatten dough & roll it according to here.
(7) once its done, put together both green & plain dough side by side where the green on below.
(8) fill in the douyong/mung bean fillings then wrap it up slowing by making sure it is 100% sealed. 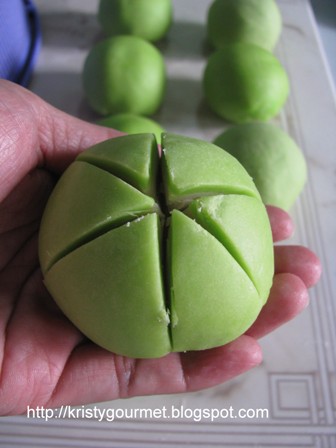 (9) now, by placing the sealed portion upside down and make 6 nice cut through the skin.
(10) finally, fry them over low heat till everything is nicely puff. Please handle with care when transferring it from the deep frying wok. The pastry is soft & tender when its hot.

*Note : try separate & loosen all portions of cutting point out of the dough by using a tooth pick (Just flip open) This will help in better expansion during the frying process. 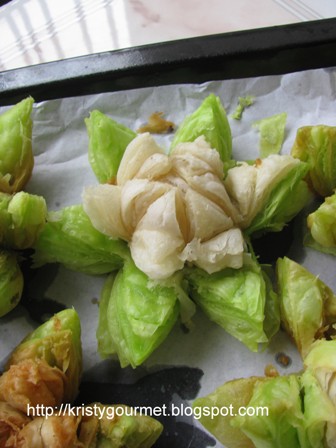 Everyone is drooling when I served these onto the coffee table the other day. The pastry is thin like tissue papers. Just easily melt in your mouth kind of thing. Finally, job done !  I can mark & cross this one from my list to do. >o<
Email Post
Labels: Dim Sum Festive Food Mooncake Pastry Snacks