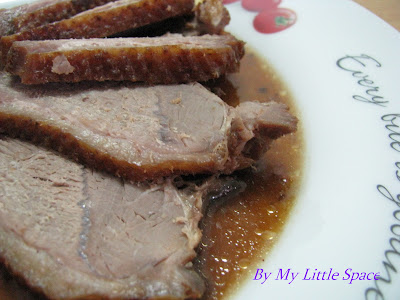 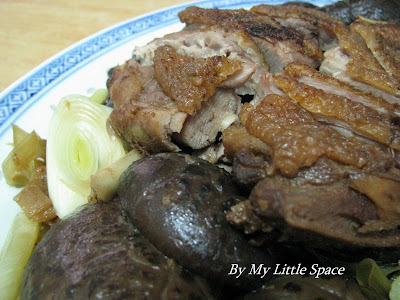 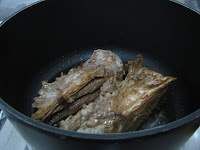 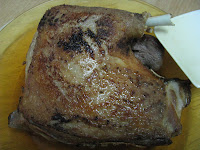 - remove the duck meat from the wok, and leave aside.
- then remove some cooking oil from the wok.
- stir in ginger, shallots and garlic; fry untill fragrant.
- add in wood ear & mushroom and stir fried for 1-2 mins.
- pour in the seasoning mixture & plum sauce/mashed plum and simmer over medium heat for another 1min.
- then place in fried duck meat and simmer over low heat. 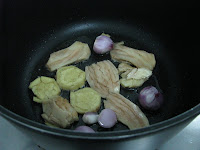 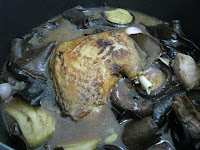 - let the meat, mushroom & wood ear simmer over low heat for about one hour or untill duck meat became tender.
- then remove the meat from the pot or wok, leave to cool before cutting/chopping.
- in the other hand, place in sliced leek over the plum sauce pot and let to simmer for another one min.
- finally, off the heat. Add in thickening if you prefer thicker sauce/gravy texture. 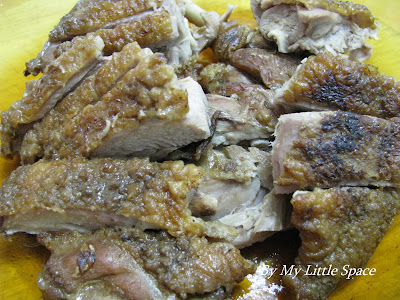 My chopping skill still considered OK lol! haha.... Actually duck bones are much more tougher than chicken bones, so it's not easy to cut them in small portion. Except if you remove the bones before cutting, then that would be easier. Normally, I'll only remove the bones between the breast meat (as shown on the first picture). 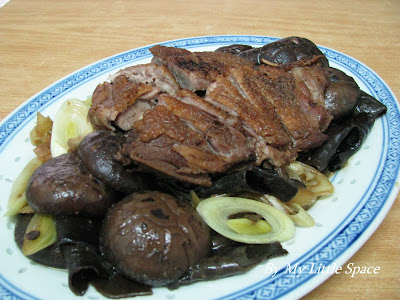 Quite presentable huh! hehe.... You know, most of my foodie friends were wondering where's all my food went each time after making them. Well, I would share them mostly with my nearby friends and neighbour. But only limited quantity to be share cause my son can actually eat the whole lot of them alllll by himself. Yes, he can!!! By the way, my neighbour was complaining to me the other day that she actually put on a few pounds due to my goodies. haha.... That's why SHARING is good!