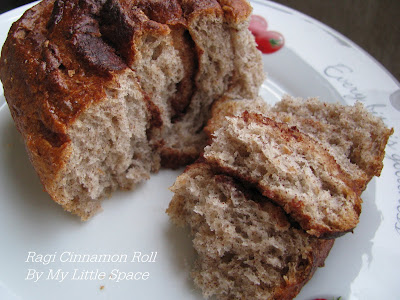 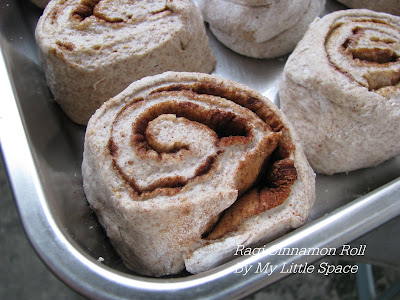 Ragi flour, is it something new? No, actually it is not something new. Just that we don't use it very often. Ragi flour is also called as red millet or finger millet. It's about the size of the millet but in different colours, something like buckwheat flour. By the way, do you know that buckwheat is not a wheat but it's actually fruit seeds! Ragi flour is gluten-free too and it's perfect for celiac patients.

And here's the recipe.

Method :
(1) combine all dry ingredients into a big bowl.
(2) slowly stir in water and mix to form a soft dough.
(3) add in butter and knead till well combined and smooth.
(4) keep dough covered and set aside for an hour or untill double in size. 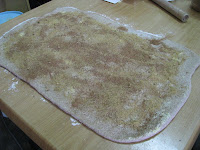 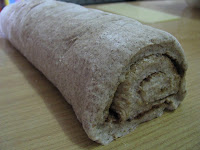 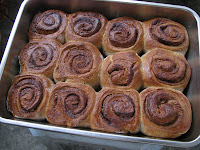 (6) once it's ready, place dough to a slightly floured working table.
(7) punch and knead to release air from dough.
(8) now, roll dough out flat into a rectangle shape about 10x14".
(9) spread on melted butter evenly and follow by cinnamon mixture.
(10) roll the dough into swiss roll and divide into 12 portion.
(11) arrange dough onto well coated pan and let to rest for 20 mins.
(12) then bake at preheated oven 220'C for about 20-25 ins or untill brown. 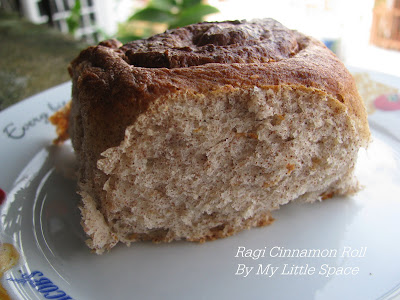 Making bread by using mixed flour is to reduce the intake of less gluten product which is good for our digestion system. Don't ever expect to have very very soft and fluffy bread from either buckwheat or ragi flour because they are both gluten-free. But with the help of spelt flour or ATTA flour should works better in the rising part. Enjoy the healthy bread to have a healthy heart!
(bread, ragi flour, spelt flour, atta flour )
#
And don't forget about the GIVEAWAYS !!!!
Email Post
Labels: Bread